Étienne-Gaspard Robert's in his Phantasmagoria show, used the magic lantern and a special cloth to make his "holographs". Today we know it as a retro projection fabric and it was used a lot in the 80's and 90's, because the projector was hidden behind it.
Pepper's Ghost is a technique used in theater, magic tricks and attractions such as the house of terror. Its creator was John Henry Pepper, a scientist who popularized the effect in 1862. 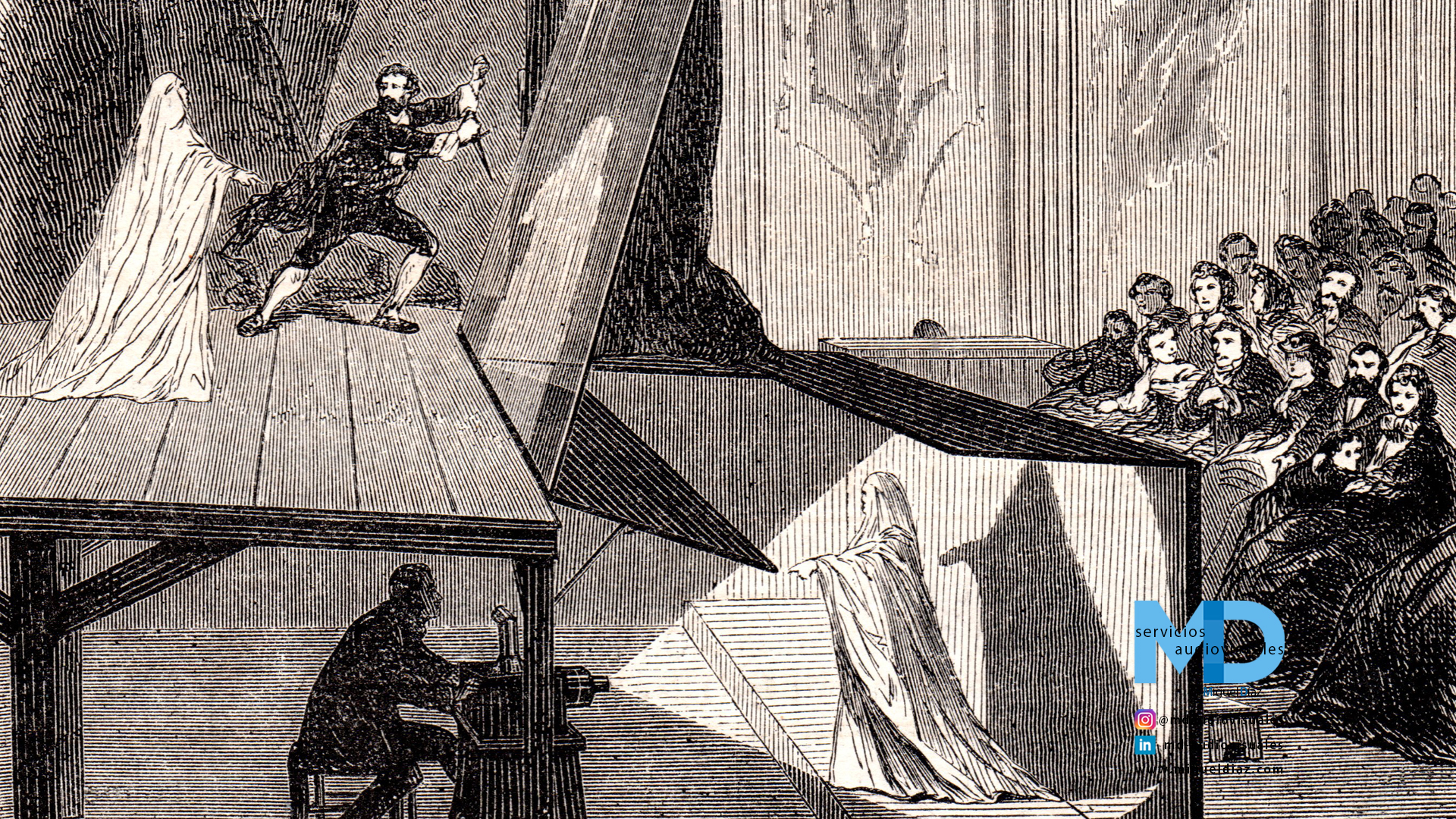 The trick is to reflect a hidden room on a glass sheet, plexiglass or transparent film. If the hidden room called a "blueroom" is dark, nothing will be seen on the sheet. However, when we light the "blue room", its interior will be reflected in the glass. The glass should be placed on the stage, rotated on its vertical axis at an angle of 45º. You can even build a second room behind the glass and play with the lighting to create the show. The magicians cast ghosts and the audience was completely fascinated. This fascination is still current, though there are new materials. The Pepper´s Ghost is used by telepromters, which are the mirrors placed in front of the cameras to display the text to follow or even used at the Disneyland horror house, at Universal Studios for the Harry Potter attraction and so on. . For an event it is a complex assembly, since it requires a structure and a material different from that of a fixed installation. The difficulty of keeping a glass or plexiglass rigid, made it thicken against the necessary sharpness. The Pepper´s Ghost folia is a transparent film to achieve the same effect as the glass. It is difficult to tighten it so that there are no wrinkles and instead of a blue room, a projection screen or even a LED screen located on the floor is used.

D uring these years much research has been done and furniture is used for small product presentations, although the concept remains the same. The Holocube and the pyramidal holography are good examples. MD Audiovisual Services has worked with these, located as a complement to the post-event party and causing a great wooow effect.

The advancement of technology has allowed miniature reproductions, and even our mobile phone can be used for holography. Toy houses that sell real wonders, such as reproductions of real-time small-scale mappings, using mobile videos as a "blue room". Holography is also used with "Holofan" fans that make the screen. A type of rotary technology that does not need external elements such as VR glasses, but is more commonly used for advertising claims.

A concept that returns by its practicality and good result in the events and exhibitions, is the perforated grid type fabric.

This is micro perforated and almost invisible, in which the contrast image is projected. The back is usually lightened to give depth. MD Servicios Audiovisuales worked with this concept many years ago in museum exhibitions. It was a fabric of an inappropriate color, much thicker and coarser, compared to the existing ones. To do this, actors were recorded on a black background and the projection omitted this color. It has innovated in the fabric, as in a wide range of projectors and the lighting, key in the assembly. Today this fabric allows to use it in events and in large format. By means of a simple drawer in the structure of the decoration, it integrates visually to perfection. Its sharpness thanks to constant innovation, allows people to project even live, project objects and even data, texts and power points. 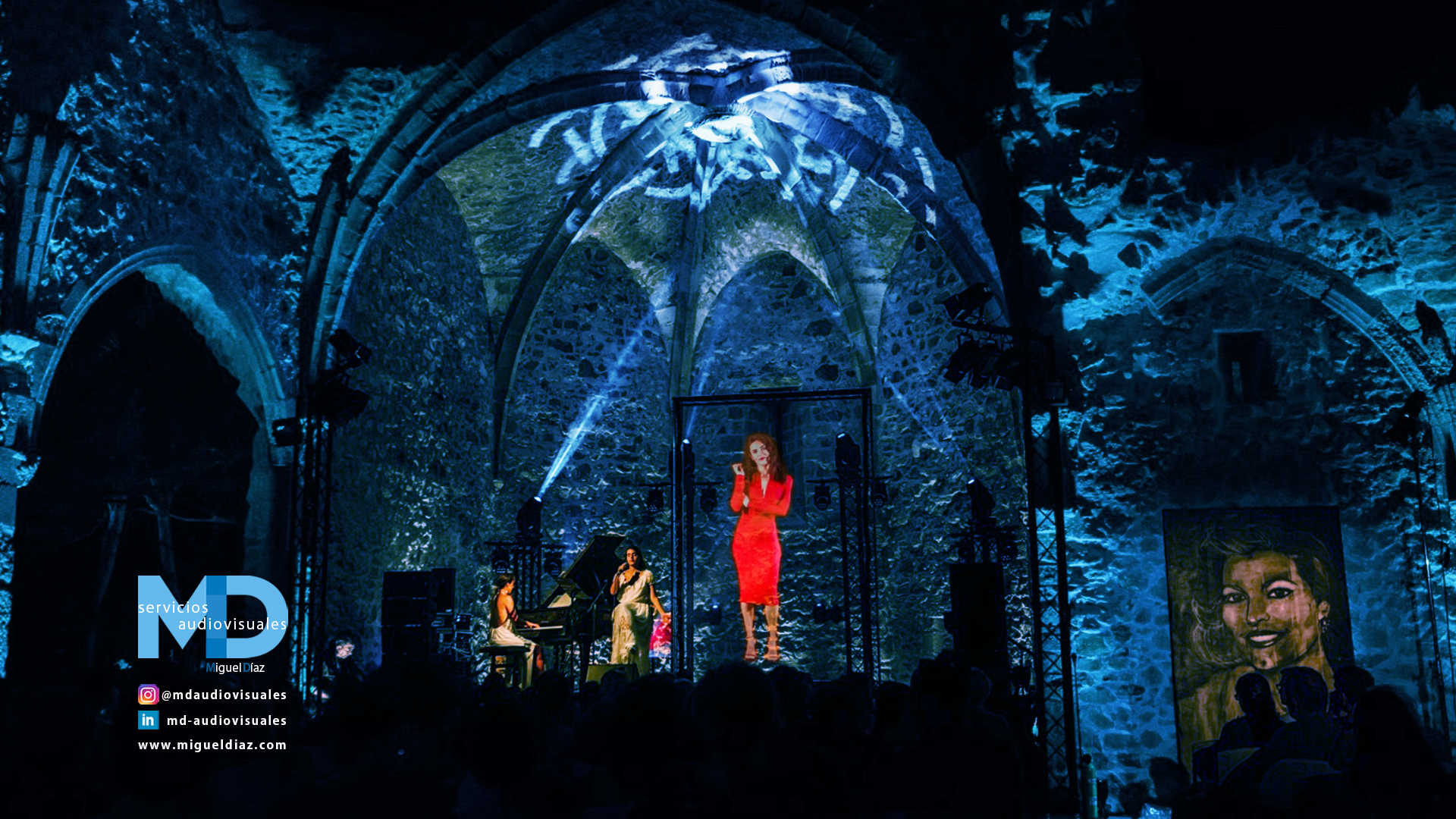 MD Audiovisual Services offers Advice, Design and Technical Production. We create innovative ideas applicable technologically, and develop concepts to apply them to all types of events.